The Syrian regime of Basher Assad is more likely than not to continue to mismanage the horrible revolution sweeping the country. Following an unprecedented condemnation of his regime by the Arab League, Assad has accused Arab leaders of creating a pretext for international intervention in Syria.

Much to the dismay of leaders of the global nation state majority who have condemned the escalating bloodshed across Syria and who also seek a long-term solution, the Syrian President continues to hold steadfast to a position that the problems are among Arab peoples, thereby offering Western countries with a pretext to conduct a military intervention against Syria. 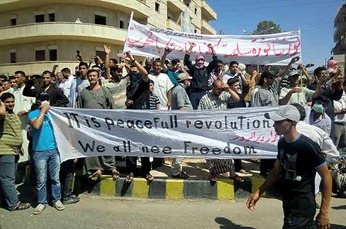 Syria remains under a great deal of pressure from all sides, foremost among them the King of Jordan. Assad has lost nearly all his support from the important Arab States & Islamic Republics, and his reputation among all Arabs has bottomed after almost one year of mostly peaceful demonstrations. In spite of the intense pressure, Assad has vowed not to give in.

“I assure you that Syria will not bow down and that it will continue to resist the pressure being imposed on it” stated Assad in interviews with western media.

It appears that the Syrian regime is unwilling to accept that the conflict, now enjoined by his own military forces following their defection, has escalated beyond the threshold where a return to prior arrangements is possible. Persisting with their view that the current situation is only a security challenge illustrates the depth of delusion to which Assad and his supporters remain subscribed. Further detrimental to a solution is Damascus insistence in seeing the Syrian Spring as a grand conspiracy designed to serve the geopolitical interests of Israel, the United States and the anti-Iran West.

The Syrian regime defiance has triggered much bitterness across the Arab world. For this reason the Muslim Brotherhood and other influential Arab political establishments and their constituents have publicly supported foreign military intervention provided the use of force originates from an Arab Military. This development is a considerably different position than where these organizations stood only a few months ago, further reflecting the intensity of disdain for Damascus miscalculations.

The slaughter of unarmed civilians by the Assad regime is undoubtedly the impetus behind the Muslim Brothers’ new position on Arab military intervention, a political position without any real teeth due to the total absence of an Arab military option.

For this reason, the regime in Damascus views the Syrian uprising as a struggle the regime can eventually subjugate, as well a fight it cannot afford to lose. By escalating the human cost, Assad desires to outlast the conflict beyond what the Syrian people can endure as long as the world condemnation penalty does not escalate into a military action to remove the regime from power.