You’re On My Radar 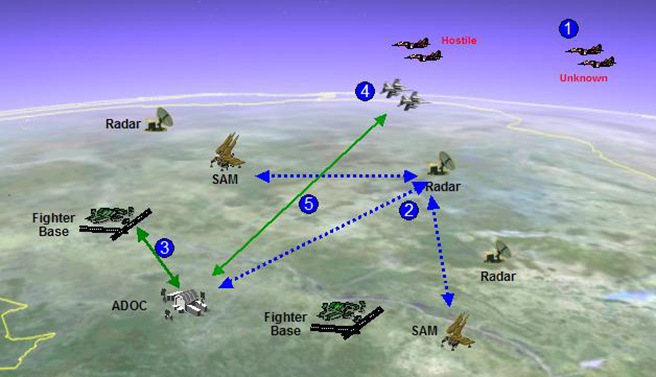 A Short Course in Air Defense

The objective of an air defense system is to protect vital interests, friendly forces and civil populations and infrastructure from enemy air and missile attack. Viewed as a system of systems, a layered air defense consists of both active and passive operations.

An active air defense is employed to direct defensive action taken to destroy attacking air and missile threats or to reduce their effectiveness. Active air defense operations are conducted using a mix of weapon and sensor systems supported by secure and highly responsive C4I systems to detect, identify, intercept, and destroy or track enemy aircraft and missiles while in flight. Active air defense is generally reactive to the initiative of the enemy and is subject to the weapons control procedures in place by the air defense commander.

A passive air defense is employed to provide for all other measures taken to minimize the effectiveness of hostile air and missile attack, including camouflage, concealment, dispersal, and hardening.

The air defense system is comprised of a wide range of resources including aircraft such as fighter interceptors and airborne early warning platforms, antiaircraft artillery (AAA) and surface to air missiles (SAMs), C4ISR systems and radars and other identification systems. These assets are organized into force structures that include Air Operations Centers (AOCs), Air Defense Operation Centers (ADOCs), Sector Operation Centers (SOCs), and Control and Reporting Centers (CRCs).

Passive Air Defense Operations
Camouflage, Concealment, and Deception (CCD) are all used to deny accurate location and targeting of friendly assets by misleading and feeding false information to the enemy. Hardening reduces the effectiveness of kinetic effects delivered by the attackers’ forces. Reconstitution capability provides for the rapid repair of damage resulting from enemy attacks and the return of damaged units to a desired level of combat readiness. Duplication of critical capabilities keeps vital systems functioning even when critical nodes are destroyed or damaged. These techniques are further supplemented by the use of detection and warning systems, dispersal, and mobility. 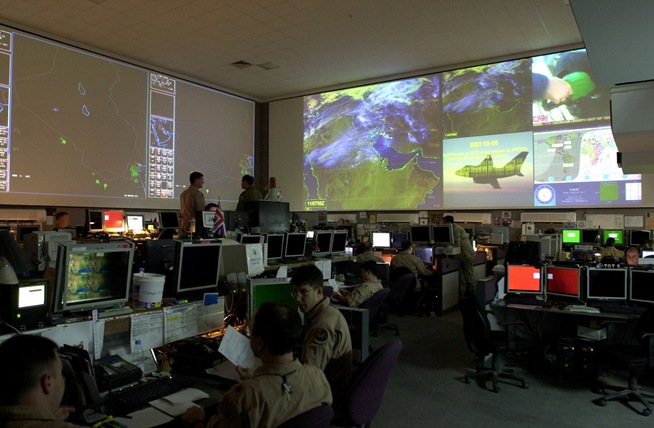 Controllers in the Combined Air Operations Center at an air base on the Arabian Peninsula monitor the status of ongoing Operation Southern Watch missions.  Spanning nearly 30,000 square feet, the CAOC is the nerve center for all U.S. Central Command air operations.

Execution / Integration of Air Defense Operations
An integrated air defense System (IADS) is not a formal system in itself but the aggregate of service air defense systems comprised of sensors, weapons, C2, communications, intelligence systems, and personnel operating under the command of a designated air defense commander. Execution of efficient air defense operations requires a surveillance and reporting system capable of near-real-time production and dissemination of tracking data to establish detection and identification capability. The effective use of air defense forces also requires clear and concise rules of engagement (ROE). To be effective, engagement control procedures are also centrally imposed, requiring standardized ROE. Additionally, an integrated execution system that provides real-time or near-real-time information to all defense assets will provide optimum effectiveness and establish airspace control measures (ACMs). These include Weapon Engagement Zones (WEZs) defined as dimensions of airspace in which the responsibility for engagement rests with a particular weapon system. The ideal aim of area control measures is to have a joint engagement zone where all air and ground defense systems employ and operate simultaneously in the same airspace.

Air Defense C2 Systems and Functions
Air Defense C2 systems should be capable of rapidly exchanging information, interfacing among components, and displaying a common operating picture (COP) to all participating components. Effective C2 systems support unity of effort during operations by enabling commanders to fuse disparate databases and geographically separated operations into a single COP that enhances situational awareness and understanding. For every operational element involved in counter air the C2 family of systems must support rapid communications and coordination links and procedures; data fusion and decision-making nodes; warning and cueing systems; links to dedicated weapons systems, other MNF partners and/or civilian authorities; and vertical, horizontal, technical, and procedural interoperability.

Common Operational Picture (COP)
The COP is a graphic depiction of the situation indicating locations of significant friendly, neutral, unknown, and enemy forces. The COP is defined as a single identical display of relevant information shared by more than one command. A properly implemented COP should reduce decision-making time; provide a shared situation awareness to coordinate air defense operations; and provide proper track management utilizing data link interfaces from all sources.

Detection, Tracking and Identification
The types of sensors and their placement determine the detection capability of the IADS. Detection sensors may include radar, optical, visual, infrared, acoustic, or other detectable signatures. Once detected, airborne targets must be tracked continuously and efficiently. This may be difficult since more than one sensor may detect and track the target, resulting in track de-confliction and correlation challenges. Identification criteria, both positive and procedural, are established according to Rules of Engagement (ROE) and provide support for identification friend or foe (IFF) modes 1-4 as per the air tasking order (ATO); procedural measures; off-board/on-board CID systems; visual ID; point of origin track maneuvers (e.g., noncompliance with ACMs); and speed and altitude with hostile intent/act.

A NATO E-3A Sentry (AWACS) is refueled by an Arizona Air National Guard KC-135 Stratotanker over northern Germany during a training mission. Due to the high demand of their airborne radars, AWACS E-3A Sentrys have been in continuous use for more than 29 years.

Weapons Engagement Zones (WEZs)
There are five generally recognized zones that define the space in which weapons are employed within the IADS:

Weapons Control Status (WCS)
WCS is a control measure designed to establish the freedom for fighters and surface air defense weapons (including small arms weapons) to engage threats. Different WCSs may be applied simultaneously to different weapons systems and in different airspace areas. The control status will include weapons Free, the least restrictive status when any target not positively identified in accordance with current ROE as friendly may be engaged; weapons tight, the normal status when units may only fire on targets identified as hostile in accordance with current ROE; and weapons hold, the most restrictive status when units may only fire in self-defense or when ordered by proper higher authority.

Fire Control Orders (FCOs)
Fire control orders are established to standardize tactical firing instructions issued during the conduct of an air battle. They are given to direct or inhibit firing by surface-to-air weapons units based on the ROE and rapidly changing tactical situations. The FCO orders includes “engage” which directs or authorizes units and weapon systems to fire on a designated target; “cease engagement” or “cease fire” directs units to stop the firing sequence against a designated target (however, units may continue to track and missiles already in flight are permitted to continue to intercept); and “hold fire” which is an emergency order used to stop firing. If technically possible, missiles already in flight must be prevented from intercepting.

Conclusion
Given the continued proliferation of hostile air delivered threats including a surge in the presence of unmanned systems (UAV / UCAV) and short range land and maritime launched rockets , a modern and capable air defense system will continue to rise in importance as a major asset for Nation States seeking to protect their vital interests, friendly forces and civil populations and infrastructure.

4 Responses to You’re On My Radar