The ability of the United States to project its influence around the globe is as critical to the freedom of our allies as it is to the interests of our own country. Throughout this nation’s history there have been distinct periods when the investments in developing new ships for the Navy have spawned technological advances that have influenced future ship design efforts around the world. One of the most famous examples comes from the American Civil

USS Monitor at James River Virginia, 9 July 1862. Note the turret with the muzzle of one of the ships two 11-inch guns and dents in armor from cannon shots.

War. The advent of the U.S.S. Monitor introduced a totally new class of fully armored, steam-powered, screw propeller-driven warship with big guns placed in a rotating turret. Nothing like the Monitor had ever existed before, and, virtually overnight, it relegated sail-driven, wooden ships-of-the-line with their primitive broadside armament and time-consuming gun-aiming maneuvers into obsolescence. The Monitor’s innovative design concepts signified a radical departure from the old ways and represented a true revolution in ship systems design. Its unqualified success heavily influenced the thinking of every major and minor naval power around the world for many decades to come.

– Today the Navy is developing a surface combatant family of ships that will serve as the backbone of tomorrow’s surface fleet. It consists of a multi-mission destroyer (DDG), a focused mission Littoral Combat Ship (LCS), and possibly the revival of an air-dominance cruiser (CGX). These ships, together with in service Aegis cruisers, destroyers and frigates will enable an affordable balance between force size and advanced capabilities to meet both current and projected future threats from both nation and non-nation state actors.

Recently the the U.S. Navy christened the USS Michael Monsoor, the second vessel in the new DDG 1000 Zumwalt Class destroyer that serves as the vanguard of an entire new generation of advanced multi-mission surface combat ships destined for the Navy’s 21st century fleet. The Navy’s designation “DDG” refers to any destroyer armed with both missiles and guns.

Expanded Role for DDG 1000 – Since first introduced to the world’s navies at the dawn of the twentieth century, destroyers have come to be recognized as some of the most versatile and aggressive surface combatants ever developed. DDG 1000 continues this lineage by greatly expanding upon the offensive and defensive roles of destroyers in the following areas:

Illustration above compares the size and form of the current DDG 51 class with the DDG 1000 class. Note the stealth features of the deck house design, elimination of antennae arrays, and larger helicopter landing surface of the DDG 1000 class.

The “glue” that binds all of these systems to each other, to the ship’s human crew and to other ships in the fleet is a first-of-its-kind, open-architecture Total Ship Computing Environment (TSCE). This computing environment enables interoperability among all shipboard systems and serves many functions analogous to those of an enterprise computing network, although translated and greatly expanded to meet to the peacetime and wartime needs of advanced surface combat ships. The TSCE provides the platform underlying all software applications used throughout the ship’s systems. It also gives the Navy increased ability to employ cost-effective standardized software and Commercial-Off-The-Shelf (COTS) hardware to better control acquisition and life-cycle costs and to expedite supply chain activities.

Four Key Concepts That Characterize DDG 1000 – To better understand how DDG 1000 works, it helps to view the ship in terms of four broad concepts: integrated warfare systems, human systems, survivability and mobility. Previous classes of ships have had “some” of these attributes; DDG 1000 has them all.

Integrated Warfare Systems – In current-generation naval ships, the norm has been to provide separate land attack, anti-air warfare and anti-submarine warfare systems, all operated and maintained independently from one another. On DDG 1000, these crucial combat capabilities are fully integrated into one cohesive system. A single integrated command center gives the ship unparalleled ability to think and to fight in multiple domain, such as land attack, undersea warfare, anti-air warfare and information dominance. Thanks to its new-generation combat system, DDG 1000 can instantly assess and respond to a variety of threats simultaneously. Equally important, the technologies underlying DDG 1000 mission system equipment have been designed from the outset to be transferable to future naval ships, as well as those already in the fleet.

Human Systems – DDG 1000 integrates the sailor as a critical part of the Integrated Warfare System. Operators are “designed in” as part of the ship’s command center. All systems and equipment employ intensive automation, ranging from sensors, to weaponry, to ship systems. Designers have scrutinized the total ship and all of the work requirements to enhance capabilities, while also reducing crew workload and headcount requirements. As a result, the ship requires only about a third as many crew members as current-generation destroyers.

Survivability –DDG 1000 employs a combination of passive and active systems to fight enemies successfully in both coastal (littoral) and open ocean environments. Not only do these systems provide the ship with outstanding war fighting capabilities, they also enhance the ability of the ship and its crew to survive even when faced with the most challenging threats, whether they originate on or under the sea, in the air or on the land.

Mobility – DDG 1000 is designed to operate in forward areas for extended periods, able to successfully transit difficult littoral areas, as well as minefields. For optimal mobility, the ship can efficiently – and to a large extent automatically – replenish itself while underway, allowing it to remain on station and in action for extended periods.

A Unique Combination of Contemporary Capabilities – DDG 1000 delivers to the U.S. Navy a unique combination of capabilities that enable it to perform multiple missions with equal success:

The Ultimate Land Attack Ship – Foremost among DDG 1000’s missions is to support Marine and Joint Expeditionary Forces ashore in the littoral (coastal) environment. DDG 1000 can effectively accomplish these missions with continuous, precision gunfire at ranges up to 100 miles inland and with land attack missiles at even greater distances.

A Stealthy Hunter-Killer – DDG 1000 is a fast, stealthy, heavily-armed hunter-killer ship. It bears the most sophisticated and most thoroughly integrated suite of radar, sonar, command, control, communications, intelligence and war fighting systems ever arrayed on one ship. These systems enable DDG 1000 to seek out and destroy – or, if need be, to circumvent – any threat it encounters, including other surface ships, submarines, aircraft, mines, coastal gunfire and missiles.

The Smartest Ship Afloat – DDG 1000 simplifies war campaign and battle management activities by integrating its own vast array of enterprise-computing resources with those of other sea borne, land-based, airborne, and space-based assets of the joint services. As a result, DDG 1000 can assess, manage and act on any threat faster and more efficiently than any other ship in history.

A Top Performer on the Water – DDG 1000 is vastly different in appearance, design, construction and function than any previous naval ship. Below the waterline, a high-performance, wave-piercing hull slips quickly and easily through the water with a minimal wake. Above the waterline, a unique new design minimizes the ship’s radar signature to deceive any opponent. Key aspects of this novel design include sloped, low reflectance surfaces and an unobstructed superstructure having no conventional masts. A fully-integrated electrical power system drives DDG 1000 swiftly and silently and, at the same time, generates sufficient electricity to propel the ship and to operate all on-board systems, including current and future-generation weapons.

A Tough Survivor – DDG 1000 is unrivaled in survivability thanks to its unique combination of innovative armament, sensors, ship systems and stealthiness. Its inherent toughness increases its ability to carry out its multiple missions, to sustain and protect its crew, and to return home safely. 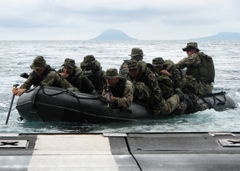 Conclusion – Design once, and use many times is a philosophy of demonstrated economic and technical validity. Derivatives of the advanced mission systems equipment designed for DDG 1000 may also prove essential to every new major class of surface ship that the Navy expects to build in the foreseeable future. The widespread application of common technologies across entire fleets of ships is the key to enabling true joint battle space integration, and is an essential component of the Navy’s plan to deploy a balanced and more capable fleet in the 21st century. Equally important, these systems offer the potential of improving the performance and cost-effectiveness of existing naval ships.